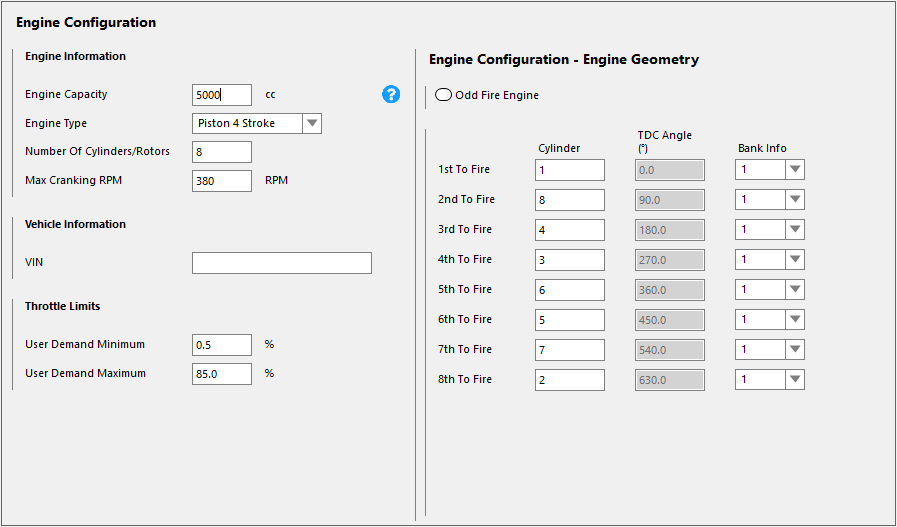 Engine Capacity - The Displacement of the engine. The units for Displacement are selected in the NSP software under Preferences > Units Options
Engine Type - The type of engine being used. Select from Piston 4 Stroke, Piston 2 Stroke, and Rotary engines.
Number of Cylinder/Rotors - The number of cylinders or the number of rotors.
Max Cranking RPM - The RPM value below which the engine is considered to be cranking. Above this value the engine is considered to be running. Default 380rpm

VIN - The VIN to be sent via CAN, if connected, and displayed on OBD diagnostic equipment.

User Demand Minimum - Below this value of Throttle Position for a cable throttle, or Accelerator Pedal Position for a DBW throttle, the system is considered to be at Closed Throttle. Used by functions such as Idle Control and Decel Cut to know when the throttle has been closed. Any 'Zero Demand' tables will also be active when the position is below this value. Default 0.5%
User Demand Maximum - Above this value of Throttle Position the engine is considered to be at Full (Wide Open) Throttle. Used by functions such the Flood Clear to know when the throttle is wide open. Default 85.0%

Odd Fire Engine - Enable this function if your cylinder firing angles are not symmetrical. i.e. they fire at odd (uneven) angles. When disabled (most engines) the ECU will assume an even fire engine and will automatically calculate the firing angles. When enabled the per-cylinder TDC Angle will become available for adjustment and will be used by the ECU. (Default = Disabled)
Cylinder - Enter the Firing Order of the engine here. This is used to determine the sequence in which the injector and ignition outputs will fire. Note that injector and ignition outputs are to be wired in cylinder number. i.e. output number goes to cylinder number. The firing order must always start with cylinder 1.
TDC Angle - Only used when the Odd Fire option is enabled. The firing angle of each cylinder is entered into these values so that fuel and ignition events are at the correct time. See 'Odd Fire Engine' for more details.
Bank Info - If more than one engine bank is being used, each cylinder can be assigned a bank. The bank value is used by any function that requires banked cylinder information. Eg, O2 Control function when there is an O2 Sensor in each Bank to know which cylinders are controlled by which O2 Sensor, Nitrous control when per-bank corrections are required, Knock Detection and Control etc. Up to 2 engine banks are supported. Any 'V' style engine such as a V8 or V8 has two banks of cylinders. Any inline cylinder engine such as an Inline 4 or Inline 6 engine has one bank of cylinders.