This node allows you to enter a voltage vs temperature calibration when using an external EGT controller that is wired to the ECU via an Analog Input.
When the sensor wiring Input Type is set to Thermocouple - Type K, there is no requirement for a sensor calibration, and this screen will be blank and 'No Calibration Required' will be displayed.
The sensor type is set in the Wiring node under Input Type. The unit scaling can be changed via the Preferences > Unit Options menu.

This node sets the display settings for the EGT channel.

Sets the temperature at which the EGT Displays, Gauges and Bars will enter their lower warning state.

Sets the temperature at which the EGT Number Displays, Gauges and Bars will enter their upper warning state.

Sets the temperature at which the EGT Number Displays, Gauges and Bars will start.

Sets the temperature at which the EGT Number Displays, Gauges and Bars will end.

This node calibrates the DTC options for the EGT Sensor.
If using a TCA CAN Thermocouple expander, the minimum and maximum voltage DTCs will be disabled.
The EGT sensor operating temperature can be monitored, and a DTC flag triggered if the monitored temperature goes above a set threshold.
Maximum - sets the maximum allowable temperature as monitored by this EGT sensor.. Any measured temperature above this will trigger the DTC when met.
DTC Severity - Sets the level of severity when the EGT safety system triggers. 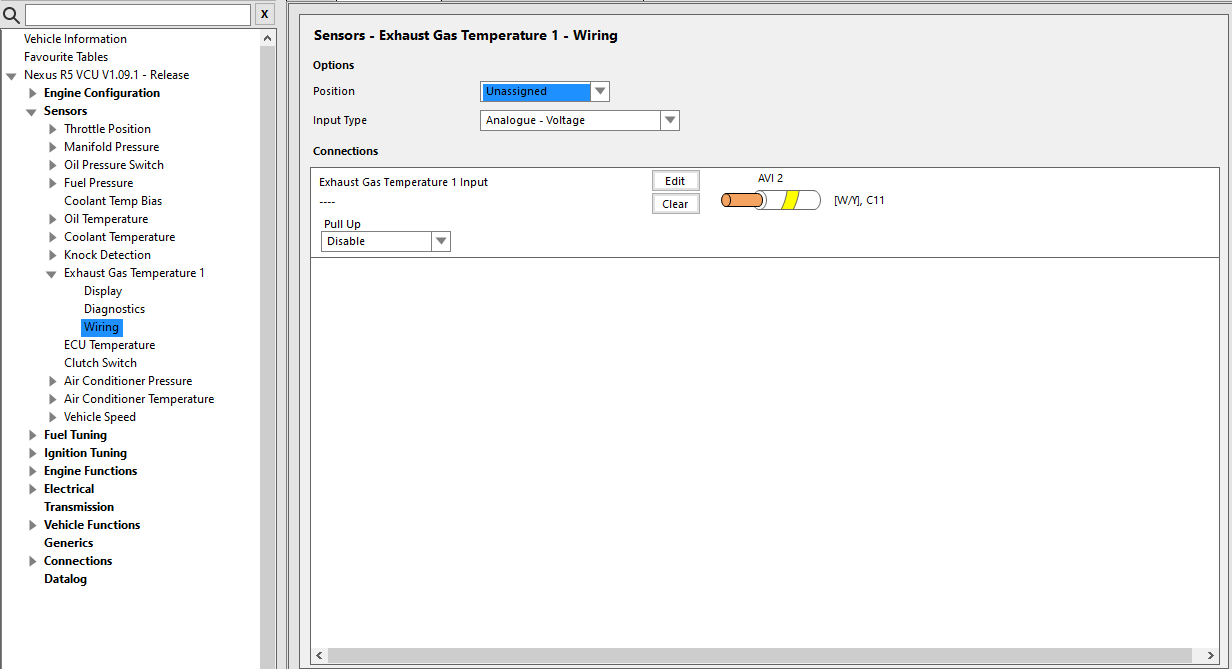 This node allows you to set up and configure the EGT sensor position and input type.

Sets the physical position of the EGT Sensor in the engine. For installations with individual EGT sensors per cylinder, set this to the cylinder this sensor is monitoring. For systems where only 1 EGT sensor exists (for example in the collector or dump pipe) set the position to 'Unassigned'.

This assigns the physical input used for the EGT sensor. On TCA units, this is the physical port the sensor is connected to on the TCA unit.