The NSP Quick Tune function is designed to aid tuners in reducing overall tuning time by recording, displaying and applying a lambda correction to specific cells. Similar to short term fuel trims, this feature will adjust the current base fuel table operating cell to achieve target lambda.  It applies to only the Base Fuel Tuning Table and will need a wideband oxygen sensor configured to work effectively.
The Quick-Tune function is not a replacement for your engine being dyno-tuned, it's designed to 'rough' in the fuel map quickly and easily. This feature should not be considered a tuning replacement, rather a tool for aiding your tuner.
NOTE: In order for the Quick-Tune function to work most effectively, all ECU settings relating to fueling must be configured correctly before attempting to use this function. All engine and fuel injector parameters must be entered accurately in order for the Quick-Tune function to work accurately.
This function can be triggered by two separate methods, detailed below:

If you press the Q key at any time then NSP will automatically select the cell at the current operating point (if it's not already selected). It will look at the target lambda and the measured lambda from the wideband oxygen sensor at that instant, and it will automatically adjust the value in the selected cell in the Base Fuel Tuning table. Measured lambda will match the target lambda.
NOTE: It doesn't consider the values in the surrounding cells, so ideally the tuner should ensure that the current operating point is as close as possible to the centre of the cell before they press the Q key. 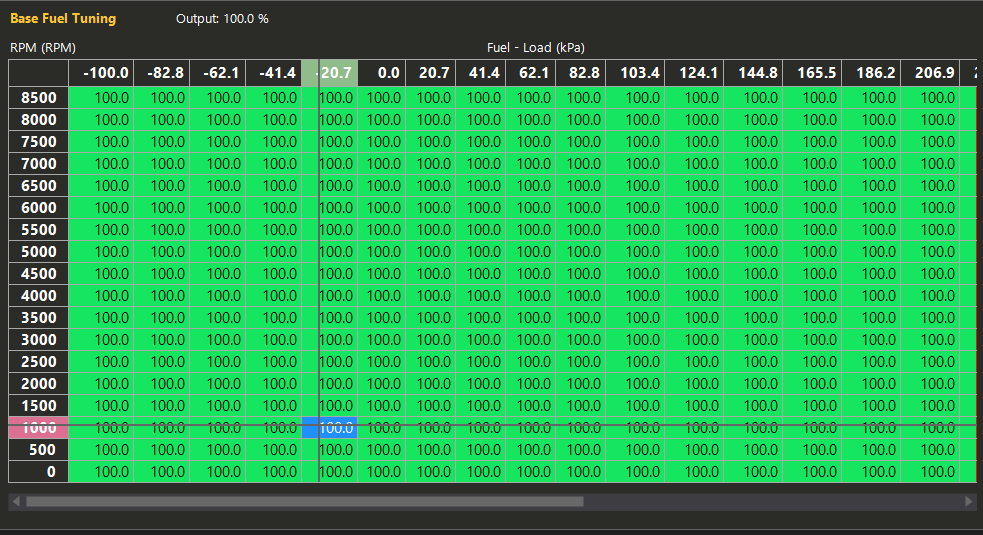 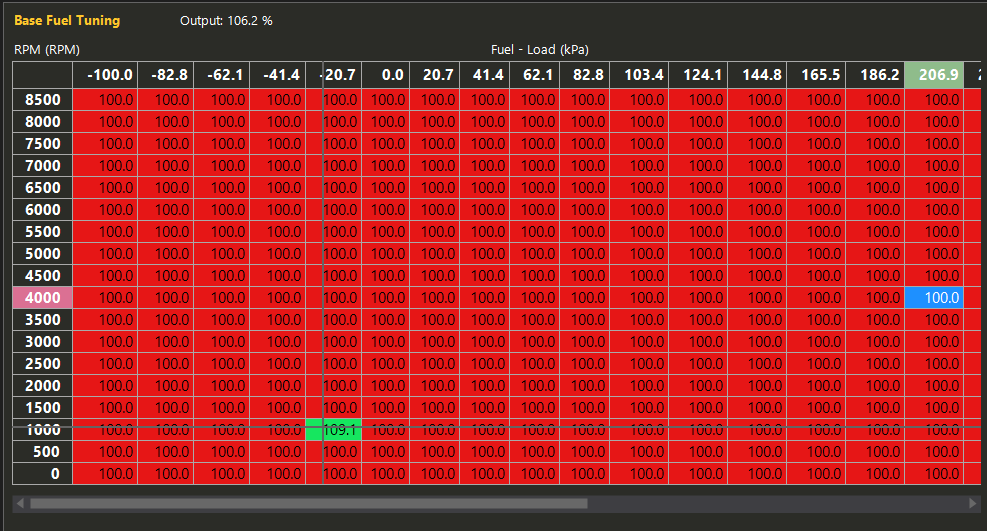 The other way in which you can use quick-tune is in conjunction with the cell trace feature, and it has the potential to save tuners a huge amount of time. When you initiate a cell trace by pressing the T key, NSP will begin drawing a series of line segments through all of the RPM and load points that are visited in real-time (this feature was already available), but NSP will also begin storing more data in the background so that it knows how rich or lean each visited cell is.
Every time NSP records a new cell trace-point (many times per second), it will also add to a list of target lambda values and measured lambda values for the closest cell to the current operating point at that instant. Only the most recent 2 seconds worth of data is stored for each visited cell.
If the tuner presses the T key and then visits a bunch of different cells (on the dyno or on the street), then NSP will store up to 2 seconds worth of target lambda and measured lambda values for each visited cell. 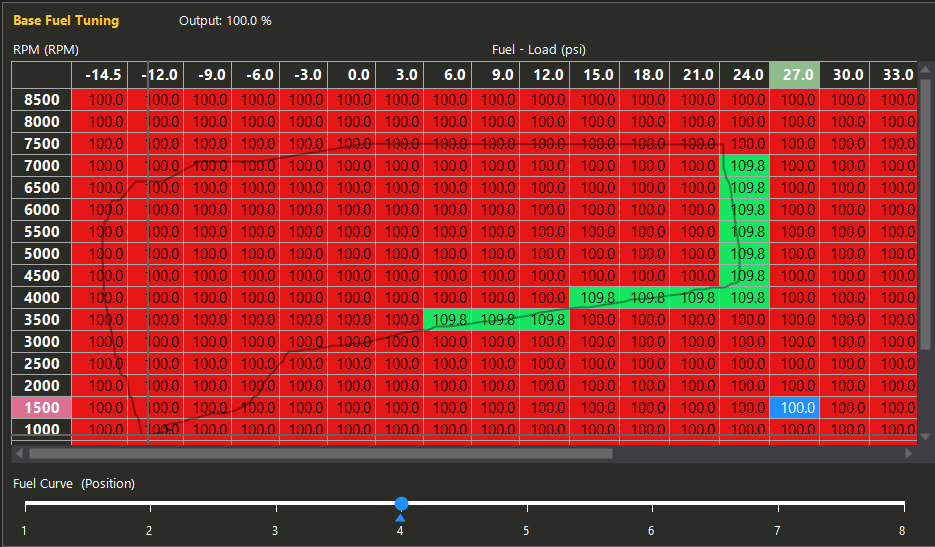 The colour of each visited cell is determined by taking the average of the measured lambda samples and the average of the target lambda samples for that cell (up to 2 seconds worth), and using the average target lambda and average measured lambda to calculate the richness or leanness of the cell. For as long as the cell trace remains active, the colours of each visited cell will be constantly changing in real-time.
Un-visited cells will be drawn in grey. If the tuner selects a cell that was visited during the cell trace, then a string will be shown above the table to provide a textual representation of the same information that is being used to determine the colour of that cell. 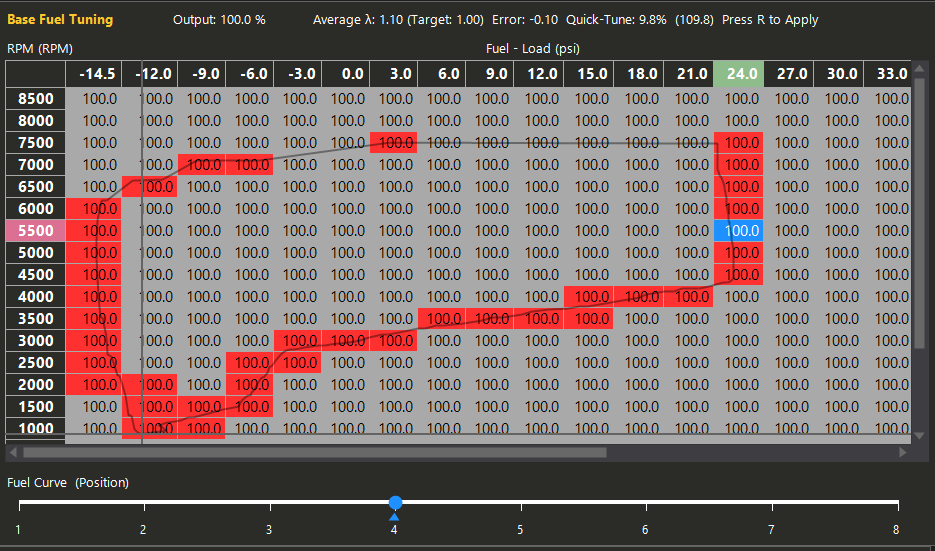 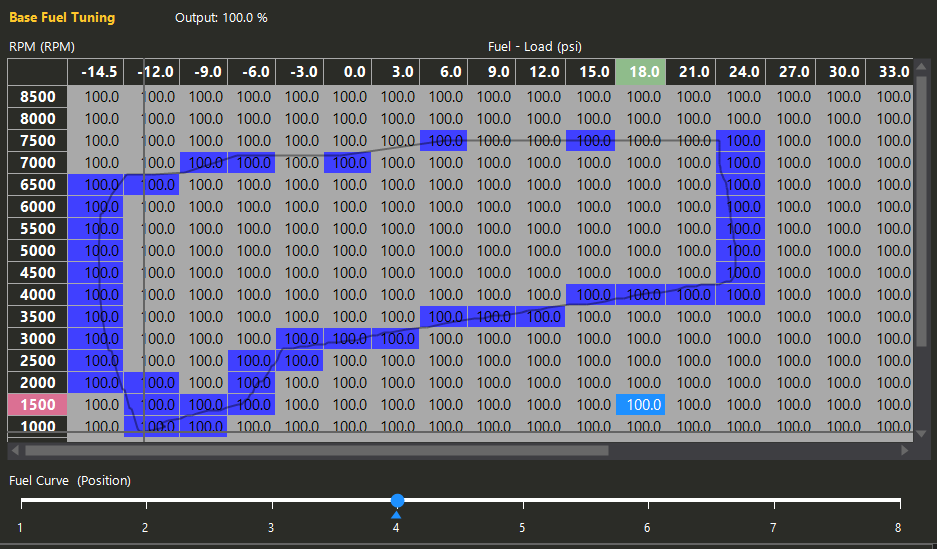 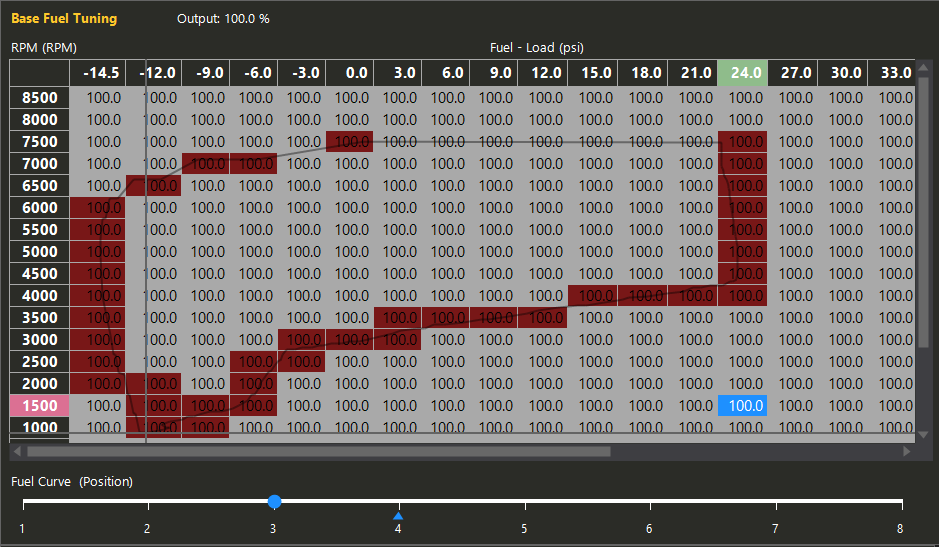 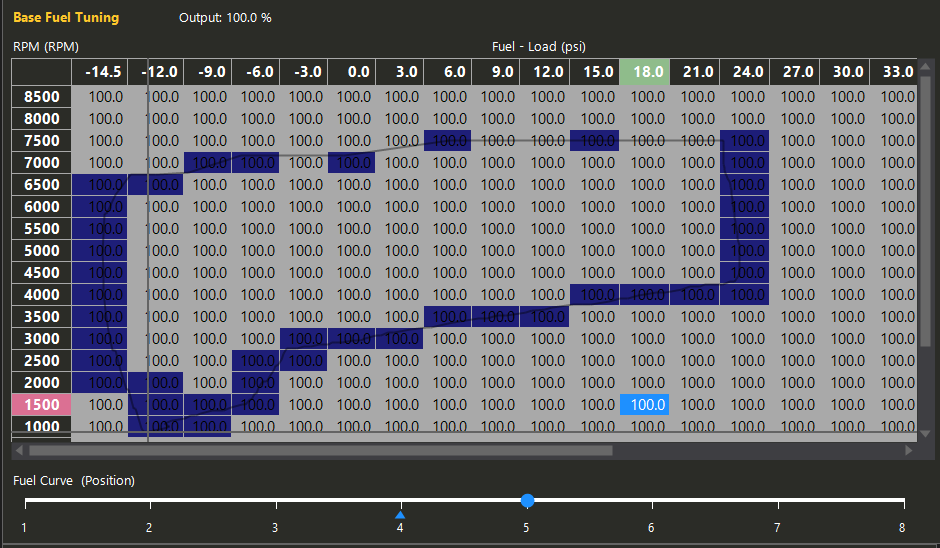 If the Base Fuel Tuning table has its slice axis enabled (4D) and a particular row and column were only visited on a different slice, then the red or blue colour will be drawn much darker to indicate this. 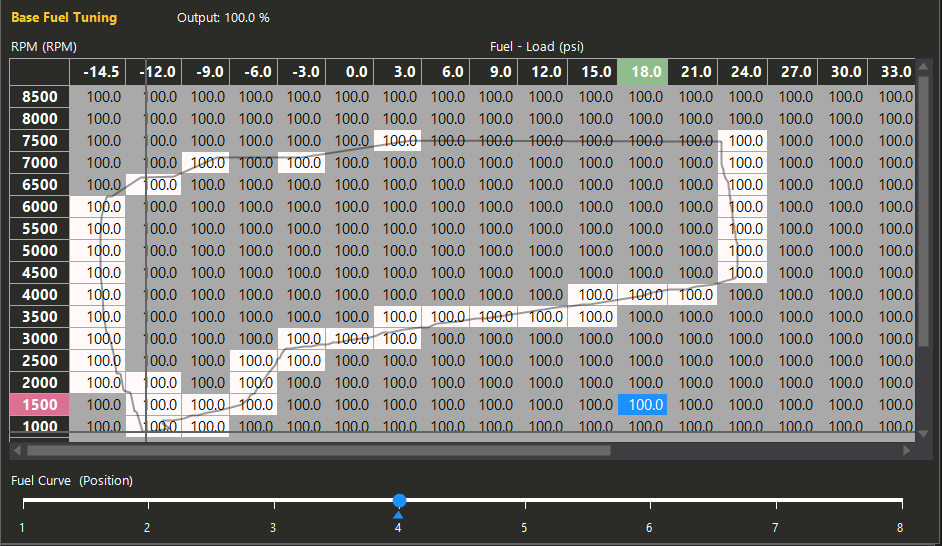 If the average measured lambda over the last 2 seconds is exactly equal to the target lambda, then the cell will be drawn in white.
At any time during cell trace, if the tuner selects a single cell or range of cells and presses the R key, then all of the traced cells within the selected cell range will have their value automatically adjusted.
Before this quick-tune feature was implemented, if the tuner wanted to perform high-load tuning then they would typically do a series of ramp runs on the dyno, manually/tediously making adjustments to the Base Fuel Tuning table after each ramp run by cross-referencing with logged data about the target and measured lambda. But with the new quick-tune feature, they can simply do one power run (per boost level where applicable) and then select the traced cells and press the R key, and maybe do one more ramp run afterwards to confirm that the lambda is correct at all times. That's it!
For street tuning without the help of a second person, the user can simply initiate a cell trace by pressing the T key and then go for a drive for as long as they want, and at the end of the drive they can select all of the cells in the Base Fuel Tuning table and press R. Next time they go for a drive, the measured lambda will be correct at every cell that was visited on the previous drive.
NOTE: If O2 Control is active while using QuickTune any fuel trim data will be included in the applied QuickTune correction with the aim of zeroing out the fuel trim.  If O2 Control Long Term Fuel Trims are enabled, the long term trims will be applied before the QuickTune function operates. The user will be notified with a message to inform them of this.