Even though modern engines don’t rely on distributors anymore, there are still plenty of race and historic engines that do.

What is a distributor? 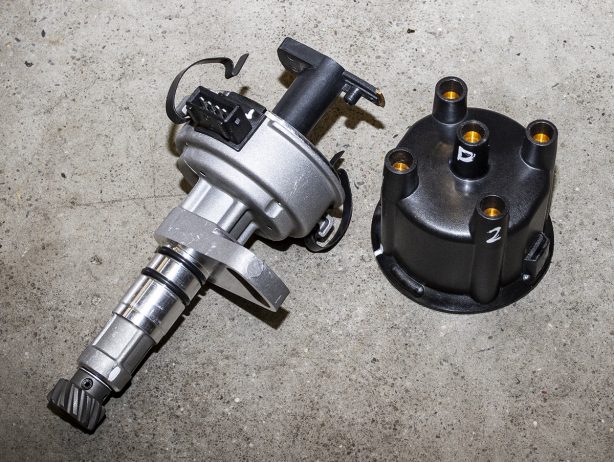 At the time it was a really clever way of doing things, way before engine management systems had the ability to fire a coil per cylinder.

How does a distributor work?

A distributor is driven off the camshaft and runs at cam speed which, in a 4 stroke engine, runs at half the speed of the crankshaft.
As the distributor shaft turns;, the “Rotor Button” (which is connected to the top of the shaft) spins and directs the incoming spark (which it receives through a spring-loaded pin on the inside of the cap) to the correct cylinder. 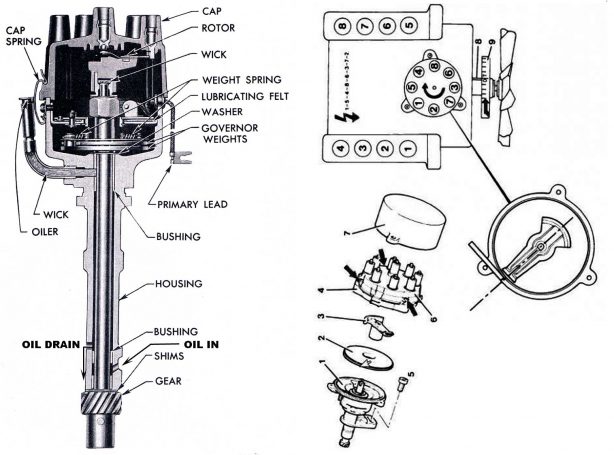 In order for the coil to generate a spark, it needs a charge signal synchronized with the engine position and speed. 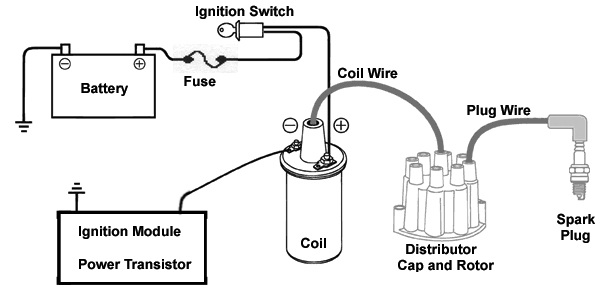 What is Rotor Phasing

Common engines like the small block Chevy, Ford Windsor or the mighty Datsun L-series all relied on a distributor to take care of their ignition duties so Rotor Phasing is not a new thing, it’s always been there, it’s just that we didn’t always have infinite control over our ignition timing to amplify potential problems.
In factory form, you would twist the distributor to advance or retard the ignition timing, which would affect the full operating range of the engine, but it’s not so much the position of the rotor cap, rather the position of the points or electronic ignition inside the distributor which is in control of when the coil fires.
So when you twist the distributor you’re moving the triggering event and the rotor phasing at the same time, inadvertently avoiding the problem that we are talking about.
Things get a little more complicated when we add a modern engine management system triggered from a crank position sensor which then sends a signal to the coil to fire through the distributor to the desired spark plug.
When we change the desired ignition timing in the ignition mapping we aren’t physically twisting the distributor to get the result. Instead, we are firing into a locked distributor and therefore need to make sure that the spark can mechanically make its way through the rotor button to the right cylinder – and that’s what’s known as rotor phasing.

In order to produce the highest spark energy possible and reduce the risk of cross-firing we need to get the rotor button as close as possible to the post for the desired cylinder when the spark fires.
If the engine comes around to 30 degrees before top dead centre cylinder 1 and the rotor button is sitting right over the top of the post for cylinder 1 when the coil fires we’ll get a good firing event, but if the button is sitting In between cylinders 1 and 3, or sitting over here on a completely different cylinder we will get a cough, a bang or a backfire and the engine won’t run.
This isn’t something the engine management system has any control over so we need to physically install the distributor in the correct position relative to the desired firing angle.

In the first example, we had the rotor button sitting over the post for cylinder 1 when the engine was at 30 degrees before top dead centre, but engines can run with ignition timing ranging from, let’s say 20 to 40 degrees.
If we fire the ignition timing at 40 degrees that means it’ll be sparking on the leading edge of the rotor button, whereas if we fire at 20 degrees it’ll be firing on the trailing edge of the button.

The most common mistake when setting up rotor phasing is dropping the distributor into the engine with the rotor button lined up with cylinder 1 when the engine is at the top dead centre compression cylinder 1. This would only allow an ignition timing value of 20 degrees BTDC to 20 ATDC (or negative 20 to positive 20 degrees of ignition timing).
Any ignition timing value outside of these would result in misfiring or cross firing.
This is a common mistake because a lot of engines only have a TDC mark on the crankshaft, so it’s assumed you put the engine on TDC and line the distributor up with cylinder 1, but, as we’ve explained before, that is not the case.

We must insert the distributor with the rotor button facing cylinder 1 when the engine is positioned in the middle of the desired ignition range. In our example we are using 30 degrees as the middle of the working ignition timing range which is a good starting point for just about all distributed engines.
If your engine only has a TDC mark you’ll need a way to position the crankshaft at 30 degrees before top dead centre cylinder 1.
The easiest way to do this would be to ask your engine builder to mark it when they have the degree wheel out for setting up the cam timing. If your engine is already in the car – don’t worry, there are other ways of finding your 30 degree marker.
You can buy a timing tape, which is an adhesive tape with all the angles marked on it. You simply stick it on the harmonic balancer and reference off that.
Make sure to measure the diameter of your harmonic balancer and buy the correctly sized timing tape as the distance between the markings changes with the diameter of the balancer.

Alternatively, you could calculate the angle from TDC to 30 degrees using the following steps and a bit of high school maths:
1. Measure the diameter of your balancer, multiply that by pi (3.141592) to calculate your circumference.
2. Take your desired angle (30 BTDC) and divide that angle by 360.
3. Multiply that by the circumference you calculated in Step 1.
4. This value is the distance in length (metric and imperial measurements both work here), cut a piece of string to this length.
5. Tape one end of the string to your 0 degree (Top Dead Centre) mark. Then stretch the string around the circumference (the outer edge ) of your balancer, marking with a paint pen where it ends.
6. And that’s it, you’ve now got a 30 before top dead centre mark.

Getting into the swing of things

Let’s take a look inside a V8 distributor cap. We can see 8 terminals equally spaced inside the 360-degree circle, which means we have a terminal every 45 degrees. 360 divided by 8 equals 45.
If we’ve got a timing map that goes between 20 and 40 crank degrees or 10 to 20 cam degrees (remembering that the cam spins at half the speed of the crank), that means the spark will have a “swing” of 10 cam degrees and fire up to 10 degrees either side of the post and will give good results.
The swing is calculated by subtracting the highest ignition advance from the lowest ignition advance, then dividing by two to get the centre (so 40 minus 20 gives us 20 and 20 divided by 2 give us 10).
The name of the game is to have the smallest distance between the rotor button and the target post under all firing angles. It can help to source a rotor button with a wide firing surface, or a distributor with a huge cap and button effectively giving more distance between the posts and making cross firing less likely.
Some aftermarket manufacturers have tackled this issue by making the rotor button adjustable independent of the body of the distributor, this can help in custom applications where there isn’t enough adjustment in the distributor body to get the right phasing.

So that’s the theory. Let’s put it into practice by using a real life example.
We begin by looking at our desired ignition timing values, our example – 20 degrees minimum and 40 degrees maximum.
40 minus 20 equals 20 crank degrees of possible ignition timing change. That means 30 crank degrees is the middle of the working range (40+20=60. 60:2=30).
We want to install the distributor in the engine so the rotor button is facing Cylinder 1 when the crankshaft is at 30 degrees before top dead centre Cylinder 1. To do this, we mark the distributor body and shaft against the cap so that we know the correct alignment when we install it. 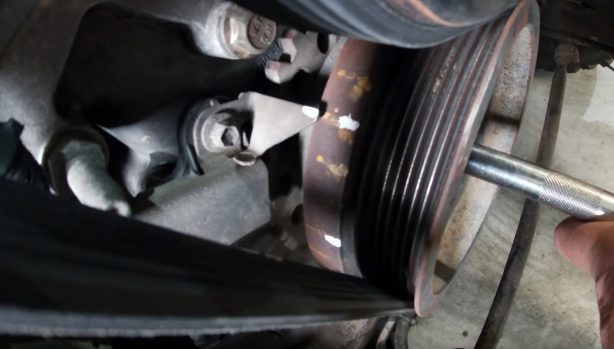 We then wind the engine over to 30 degrees before top dead centre cylinder 1 compression and install the distributor. Remember the distributor will twist when you push it down as it needs to engage with the camshaft drive. You will need to compensate for that twist as you lock it in position.
With the distributor correctly installed we need to secure it place using the original locking plate and screw.
The distributor is now mechanically phased but we still need to synchronise the ECU to the engine (that is, the ECU to the trigger pickup). This step needs to be done regardless of whether the engine has a distributor or coil on plug ignition system.
To do this, we lock the ECUs ignition timing to the middle of the working range (in our case it was 30 degrees), then we use our timing light to check where the ignition timing is firing. 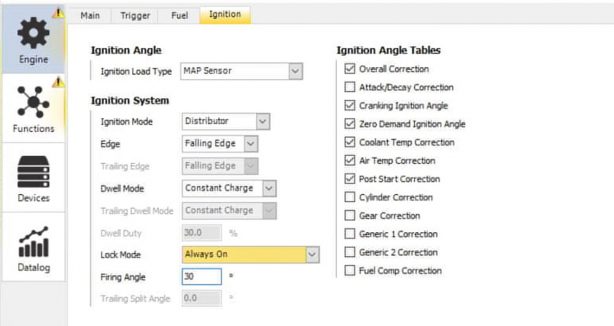 The ECU is getting engine position information from the trigger signal wired into the ECU, but we haven’t told the ECU the position of the engine relative to the trigger tooth and that’s what we need to synchronise. 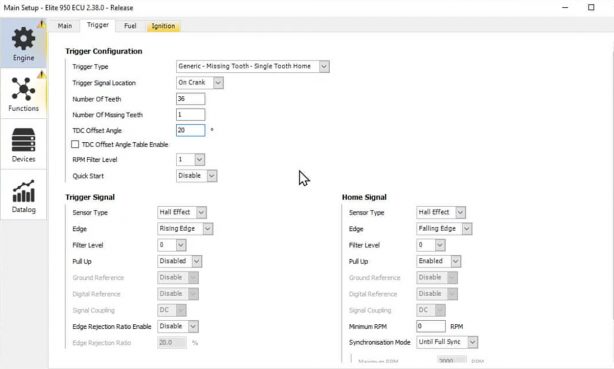 We now adjust the TDC Offset angle until our timing light shows 30 degrees on the crankshaft when we have the pickup over the spark plug lead for cylinder 1. 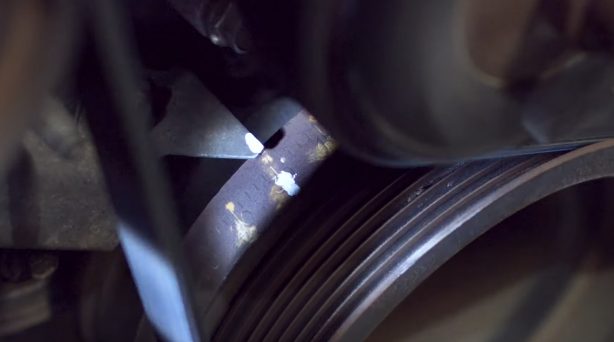 Once the timing light is showing 30 degrees we can fire the engine up (keep in mind some engines won’t like being started with 30 degrees of ignition advance so you may need to unlock the timing to start it, then re-lock the timing once the engine is running).
Rev the engine up and make sure the ignition timing stays consistent and doesn’t cross-fire or misfire. If a misfire occurs it’s an indication of either incorrect rotor phasing or incorrect TDC offset angle. Stop the engine and go back to the beginning of the process.