The Honda K-series engine is a line of four-cylinder four-stroke car engine introduced in 2001. The K-series engines are equipped with DOHC
valvetrains and use roller rockers to reduce friction. The engines use a coil-on-plug, distributorless ignition system with a coil for each spark plug. This system forgoes the use of a conventional distributor-based ignition timing system in favour of a computer-controlled system that allows the ECU to control ignition timings based on various sensor inputs. 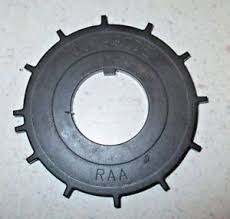 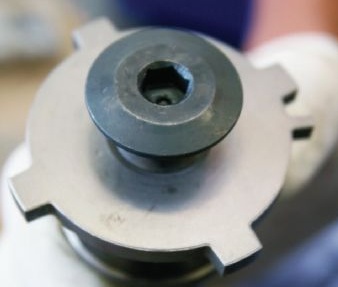 This information is available in the K20 base maps that come with the ESP Software installation. 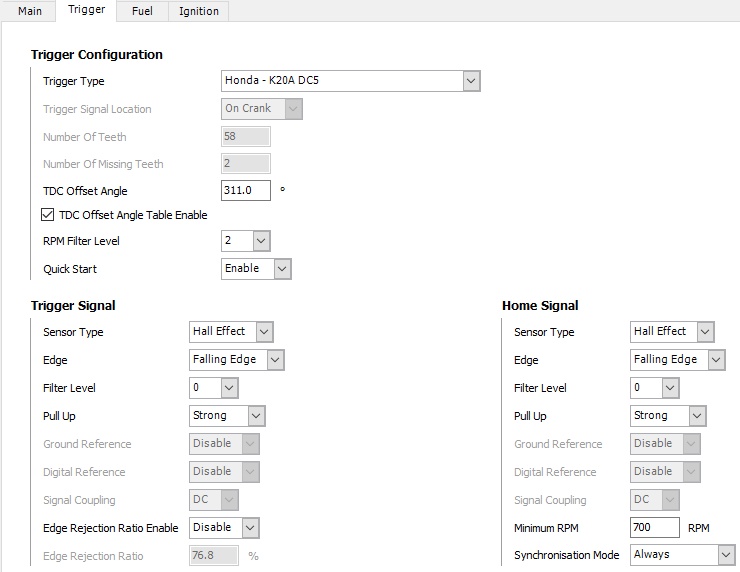 The K20 has a Hall Effect crank sensor. 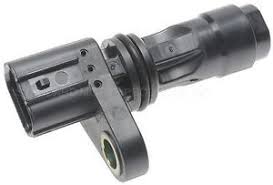 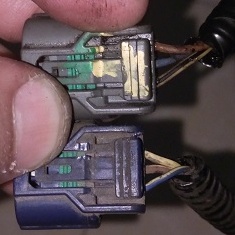 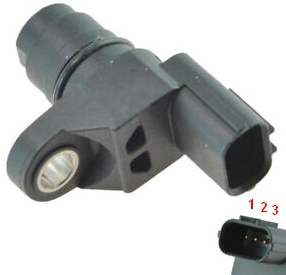 The K20 engine uses Direct Fire with an ignition coil per spark plug.  The coils have an internal igniter module and are wired directly to the ECU.
Settings are Constant Charge with a Falling edge.  Selecting incorrect settings will damage the coil and possibly the ECU. 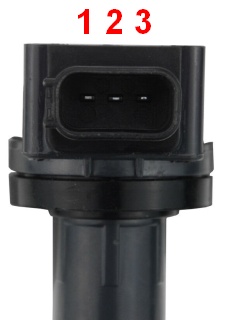 The Cam Control function is used for the iVTEC system.  This requires the inlet cam sensor to be configured and an output to drive the oil solenoid.

The Cam Control Switched function is used for the VTEC system. It requires only a output that has a high side drive capability. For the Elite ECU range a Stepper Output should be used for this purpose. 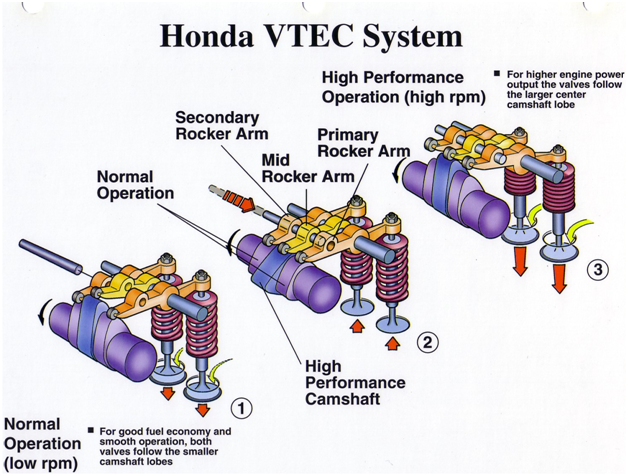 Why does Honda impletment this system? They implement it to improve optimum engine effeciency which results in more horsepower and better fuel economy. Since the camshaft spins half as fast as the crankshaft, optimum valve over-lap and timing is different at every RPM.

Muscle cars have that lope at idle because of the camshaft design. By designing a camshaft specifically for high RPM horsepower, you must use sacrifice how smooth the engine runs at low RPM. This sacrifice is what causes the engine lope at idle.

VTEC-E is quite different from the standard VTEC, because Honda did not design it for optimal horsepower at high RPMs, instead they designed for optimal fuel efficiency at low RPMs. VTEC-E does this by effectively forcing the engine to run as a 12 valve engine instead of its normal 16 valves. It does this by not allowing the second intake valve to open fully

The VTEC-E design decreases fuel consumption quite a lot but lacks the high horsepower numbers that the standard VTEC produces. This type of VTEC is standard on many of the fuel-efficient Honda models.

Before we jump into i-VTEC, we quickly want to cover VTC to give you a better understanding of how all this works. Variable Timing Control (VTC), is a mechanism that allows the camshaft gear to be continuously variable. The variable camshaft gear allows the valve overlap to be adjusted at any RPM. By adjusting the valve overlap agt different RPM ranges, effeciency and power levels are greatly improved.

Intelligent Variable Timing (and lift) Electronically Controlled (iVTEC), is a system that combines VTEC and VTC into one unit. As you can imagine, combined the best of both world results in an incredibly efficient and powerful engine. The VTEC part of the system has two different camshaft profiles, one for low rpms, and one for high rpm. The VTEC part of the system allows valve overlap to be adjusted at any moment, resulting in much greater efficiency and slightly better performance.

K20A2: The K20A2 VTEC system engages at 5,800 RPM, whilst the VTC system is always active. These two systems combined (iVTEC) produce about ten horsepower more than just VTEC alone. The K20A2 is available in the Acura RSX Type S, and TSX.

K20A3: The K20A3 iVTEC system is far different than the A2’s system. It is VTEC-E with VTC, and really shouldn’t even be classified as iVTEC. At low RPM only one intake valve opens, which decreases fuel consumption, then at 2,200 rpm, it engages the second intake valve, allowing it to operate like a normal 16 valve engine.

Much like the A2’s iVTEC system, the VTC is always active on the A3. K20A3 comes in the RSX base, Civic SI, Accord, CRV, and Element.

How Does it Increase Horsepower?

How the VTEC system increase horsepower may be slightly confusing, so let me break it down for you. Horsepower is just a measure of Torque X RPM. To increase torque, you must let more air and fuel into the engine.

If the valves must open further and for longer, the amount of air being sucked into the cylinder can be increased. Since the camshaft spins half as fast as the crankshaft, it cannot be optimized for all RPM ranges. Having multiple camshaft lobes allows you to maximize lift and duration for various RPM ranges.

Since the camshaft is optimized for both high and low rpm ranges, it makes more torque in those ranges. More torque, especially at high RPMs, equals more horsepower.

There is a lot of information to take in. Remember, iVTEC combines VTEC and VTC into one unit in the K20A2. iVTEC in the K20A3 is a combination of VTEC-E and VTC, which is much more of a fuel efficiency focused system. 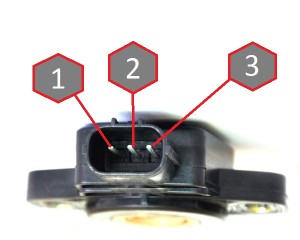 The K20 comes with a MAP sensor in the intake. 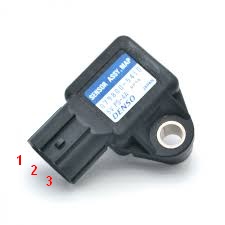 The K20 has a Hall Effect speed sensor. 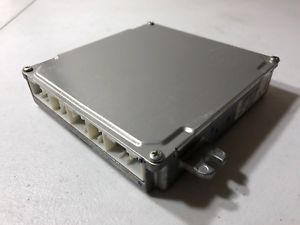 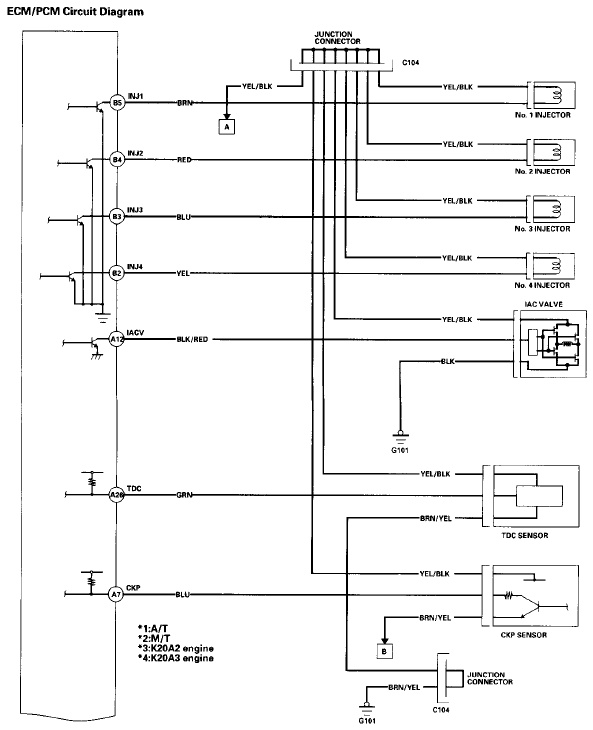 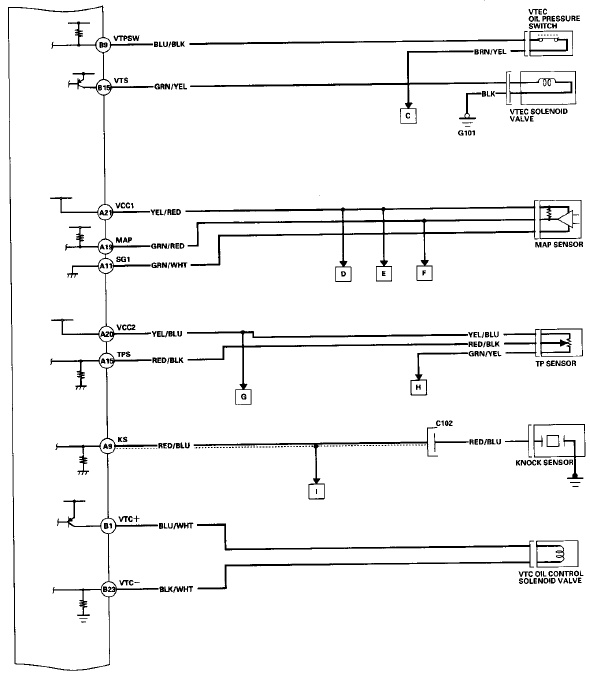 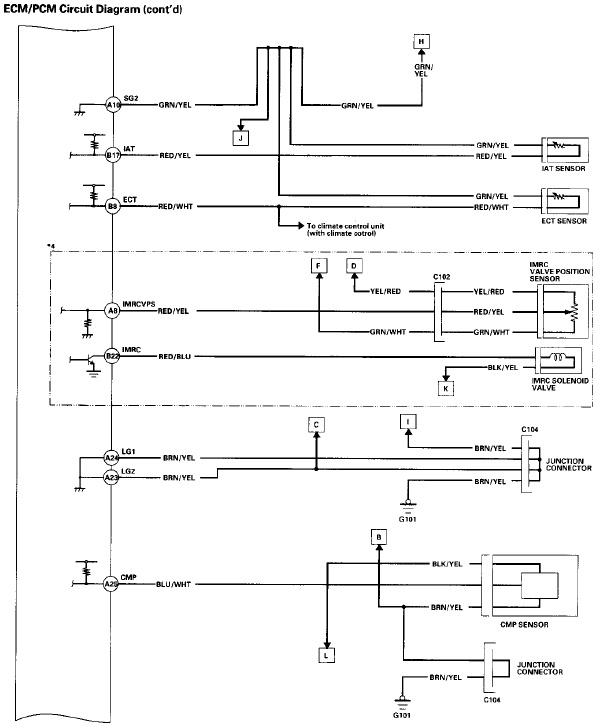 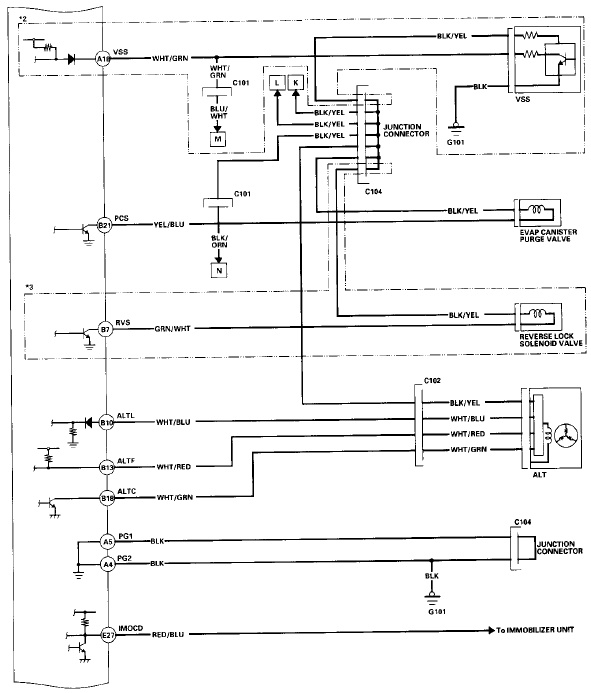 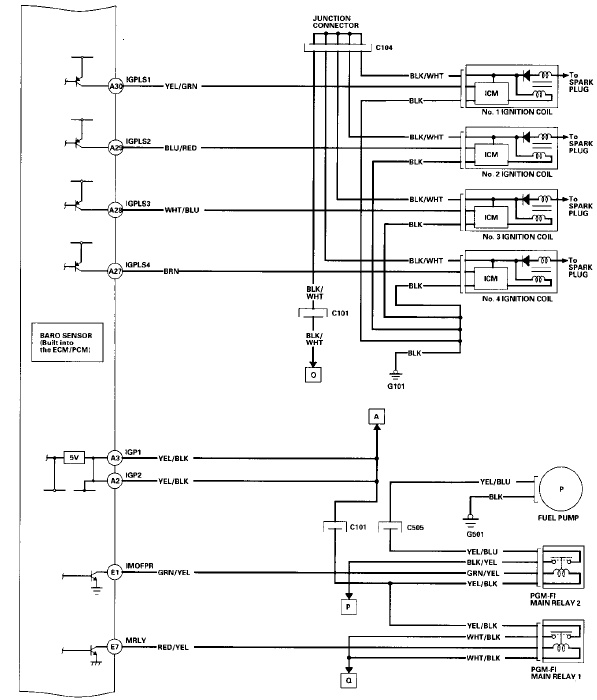 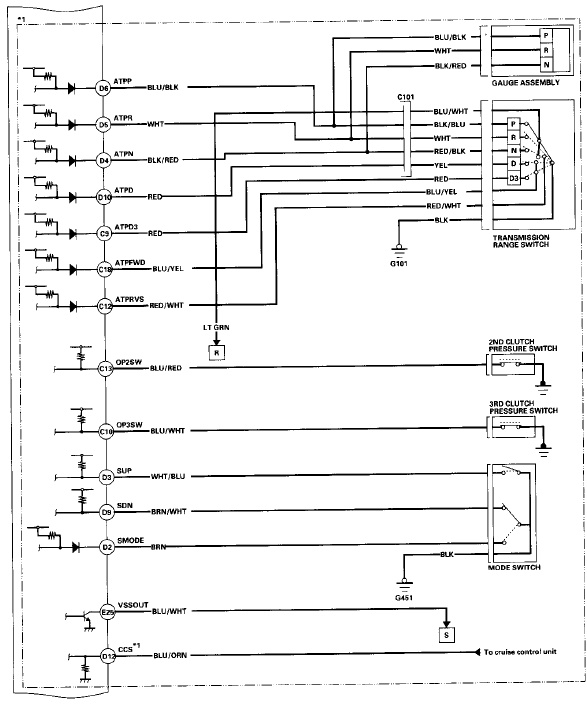 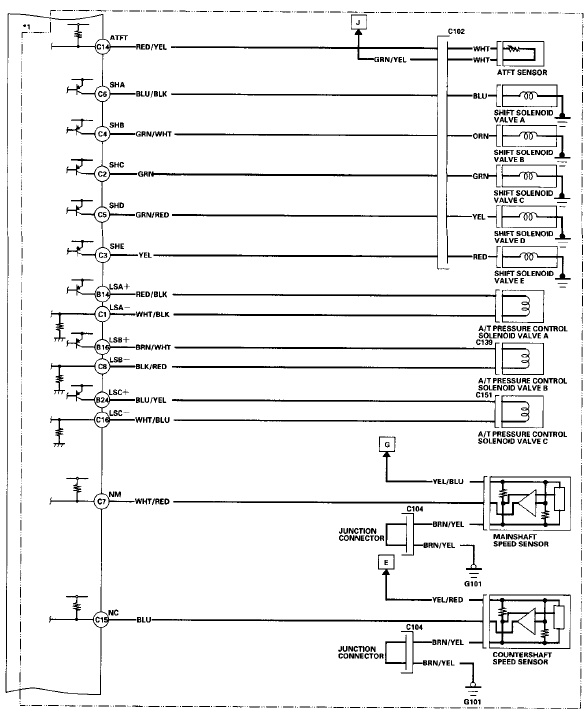 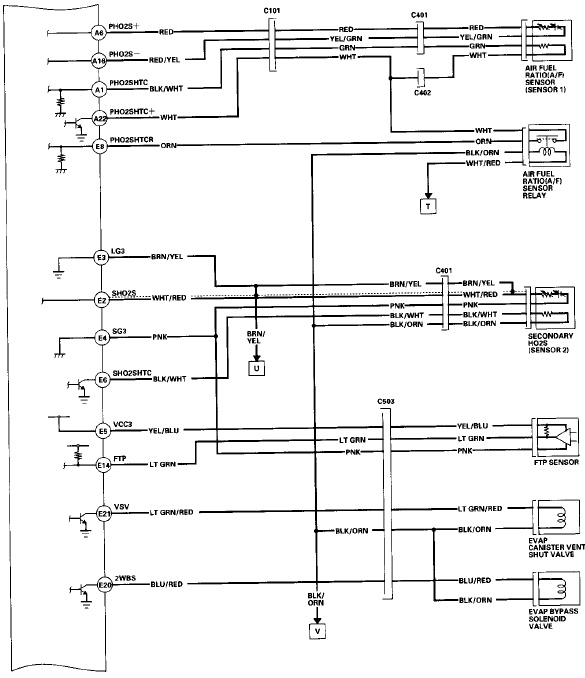 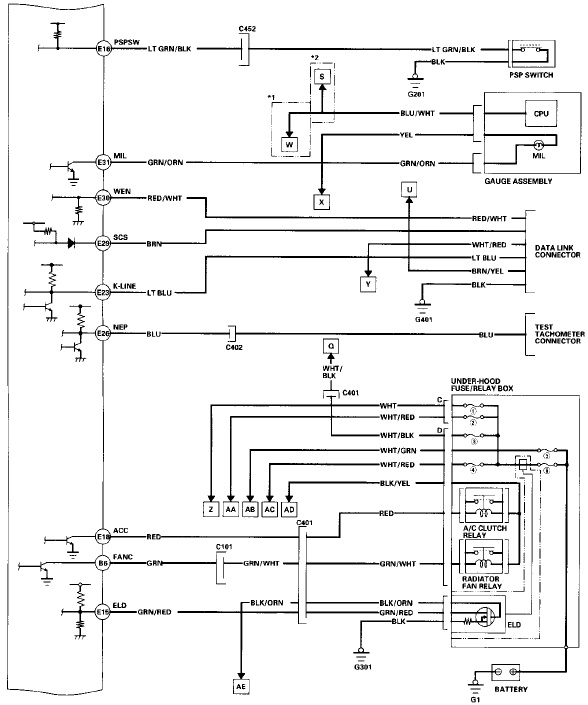