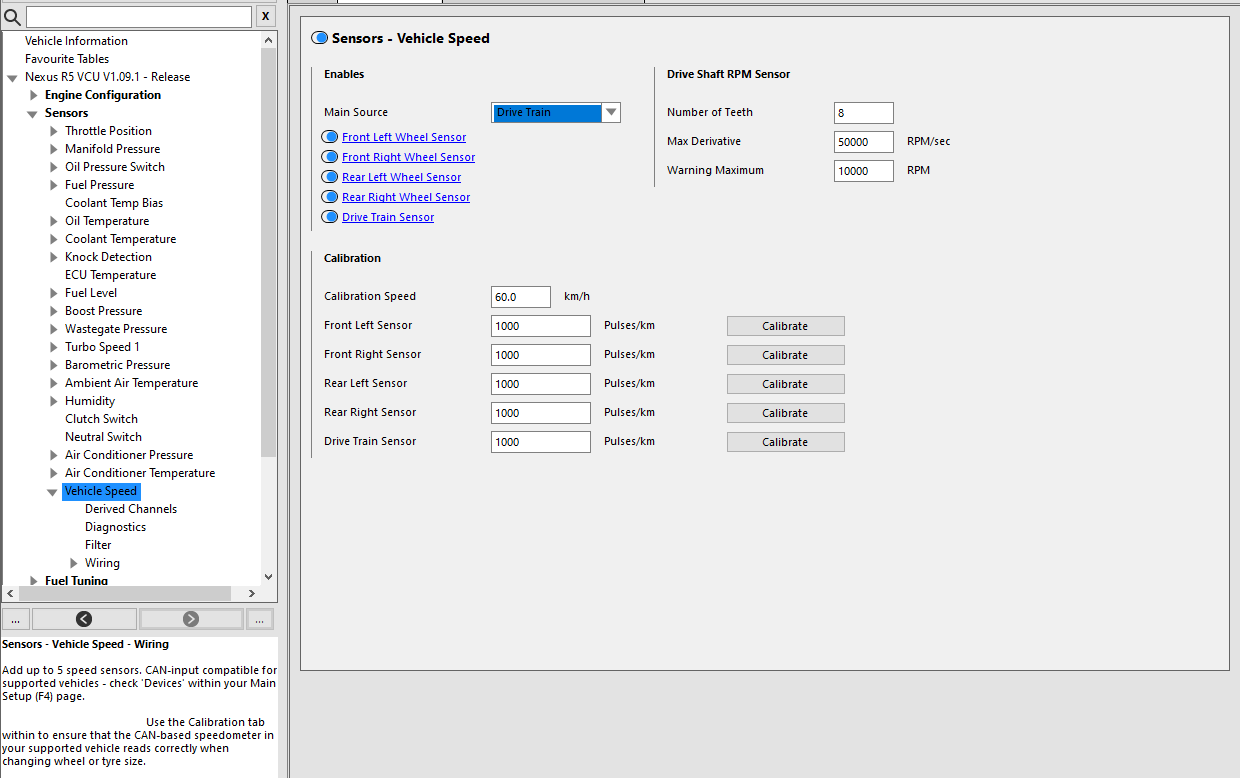 Calibration Speed - The speed that the vehicle must be moving precisely at when each sensor is to be calibrated.
Drive Train Sensor and Wheel Speed Sensors - With the vehicle travelling at exactly the same speed as has been entered for the Calibration Speed, press Calibrate for each of the enabled sensors. For digital inputs, the ECU will measure the Pulses/km or Pulses/Mile for each sensor accordingly. This value can be manually entered if it is known. If the vehicle Speed Inputs are CAN, the ECU will measure the percentage change for each sensor during the calibration stage. This can compensate for changes in wheel rolling diameter.

Available only when a Drive Train Sensor is enabled in the Wiring Tab.
Number of Teeth - The number of teeth per driveshaft revolution. This will be consistent with the number of magnets in the driveshaft RPM collar. Typically this will be 2, 8 or 12.
Max Derivative - The maximum rate of change for the driveshaft RPM. This filters out any spikes in signal due to noise.
Warning Maximum - When the Driveshaft RPM reads above this amount, any relevant items on the ESP software will flash Red as a warning of high RPM. 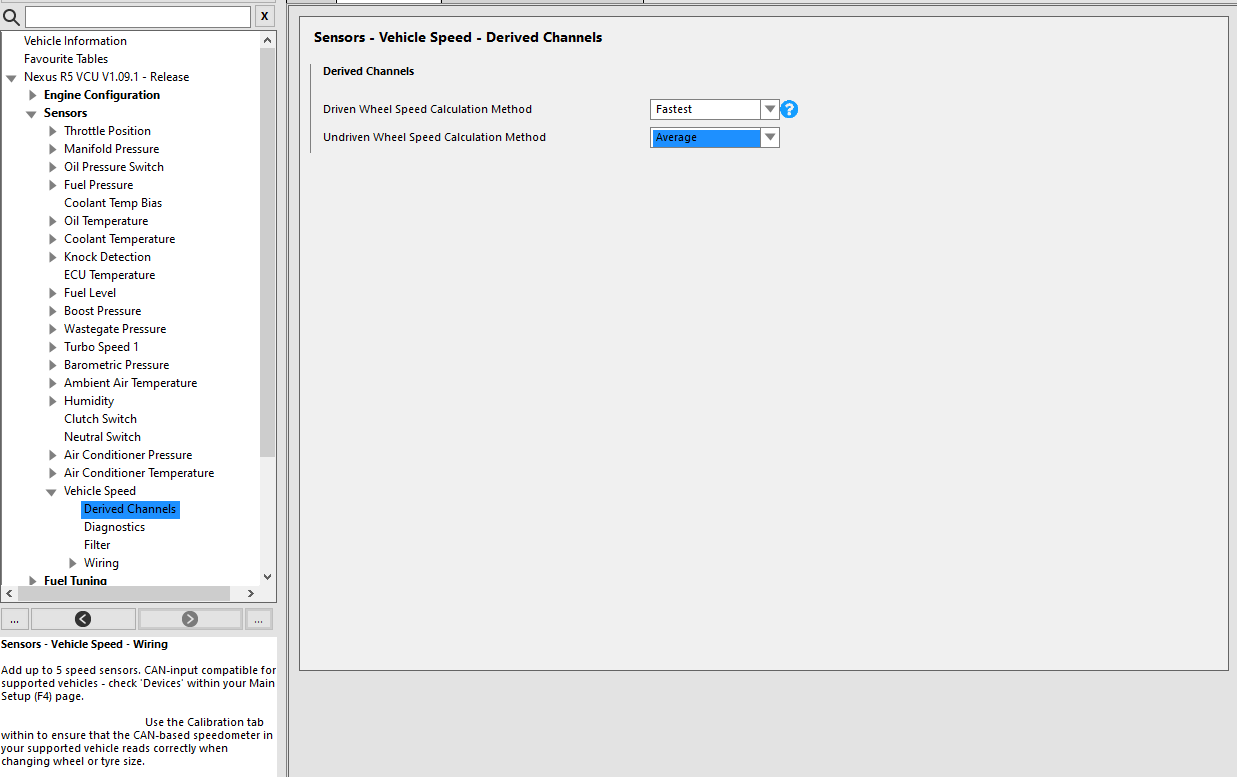 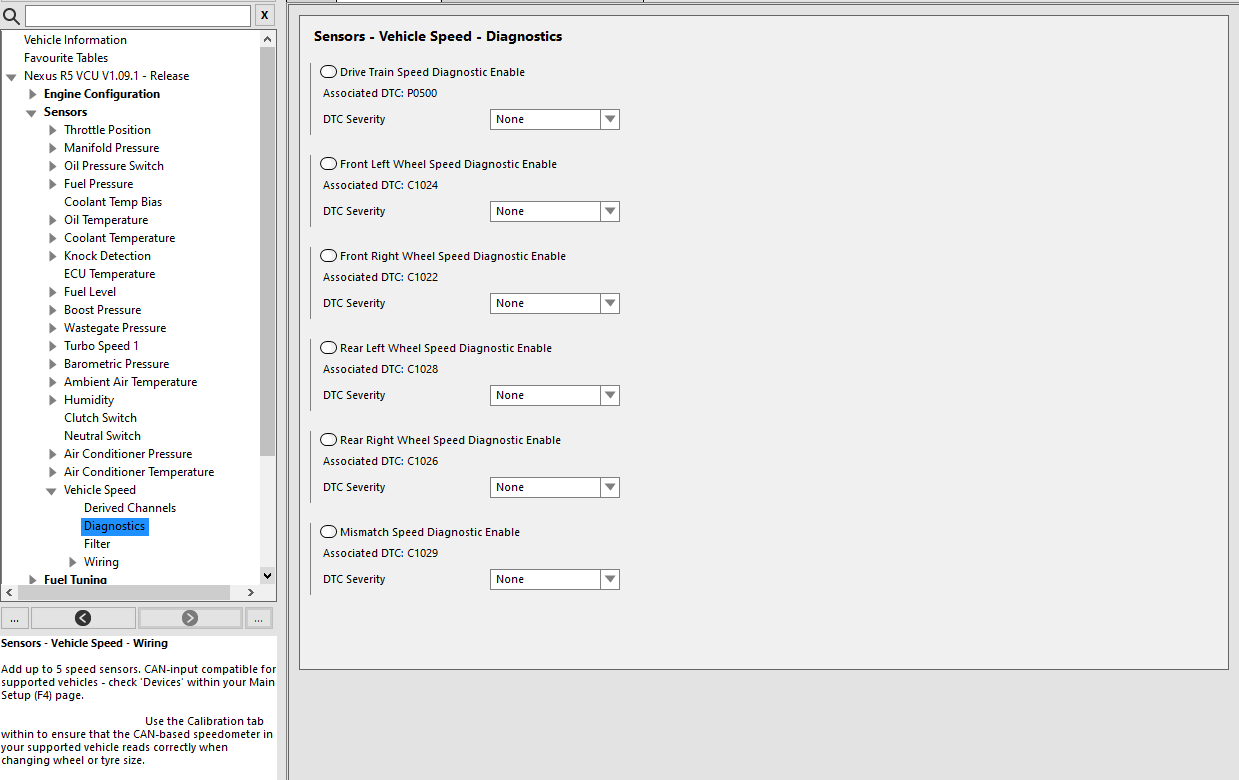 This node enables or disables the diagnostics for each enabled wheel speed sensor, as well as conditions where there is variation between the wheel speed sensors.
A DTC severity can be set, which will trigger an Engine Protection level for the relevant setting.
Diagnostic Trouble Codes will be activated under the following conditions:
If 1 or 2 sensors

If more than 2 sensors 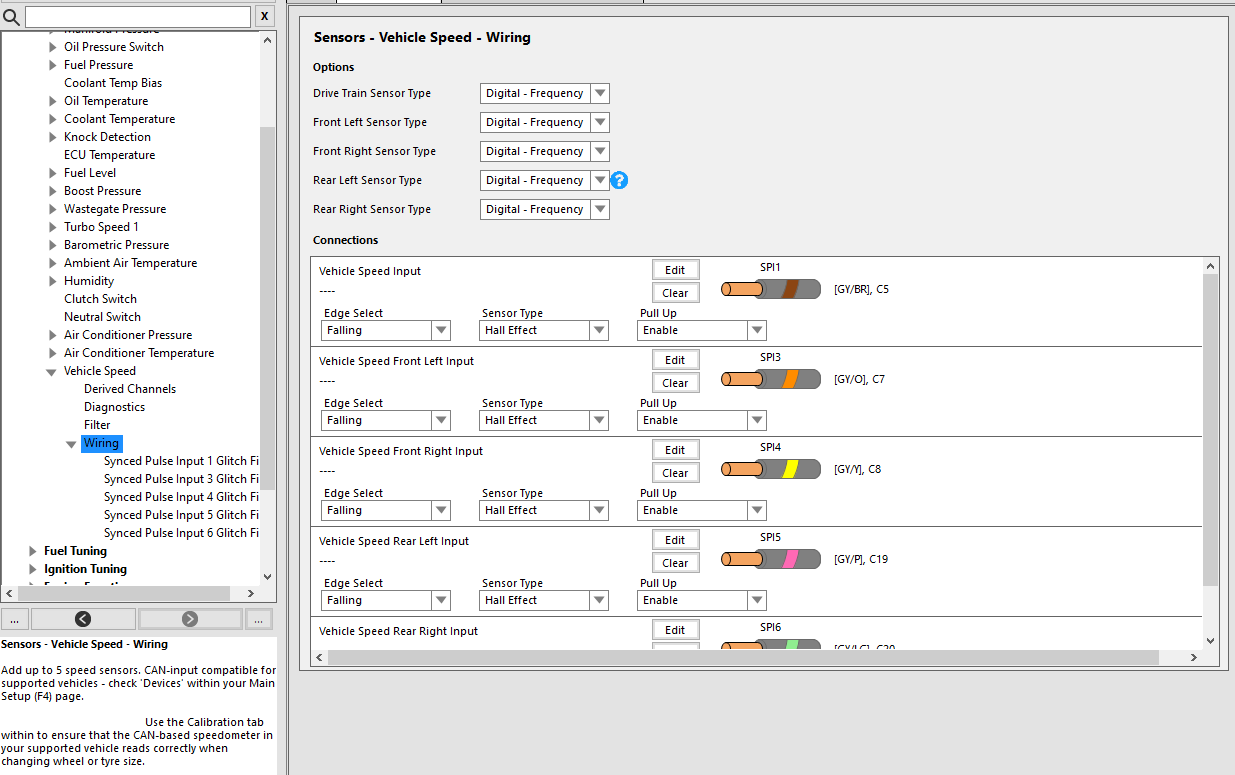 Main Source - Select the sensor that is to be used by the ECU for general use Vehicle Speed. This will be used by various ECU functions that require a vehicle speed.
Sensors - Enable any sensors that are required, and select if the sensor is wired to the ECU or is input via CAN.

Select between a Digital Frequency or CAN Input. When Digital Frequency is used as the type of sensor, select an appropriate input to use for each of the enabled Vehicle Speed Sensors. An SPI (Synchronised Pulsed Input) should be used.

Edge Select - Select the edge of the signal to be used. Typically this will be Falling unless instructed otherwise.
Sensor Type - Select if the sensor being used is a digital Hall Effect or a reluctor sensor.
Pull Up - Some Hall Effect sensors require a Pull Up if it is not incorporated in the wiring or the sensor itself. Enable as required.

The Arming Voltage table will be enabled if the input is an SPI, and the Signal Type is Reluctor.

This table is used to set the voltage threshold at which the ECU will start listening for the activation edge on the input signal.

The Glitch Filter table will be enabled if the input is an SPI.

This table sets the amount of time in microseconds that the signal pulse must remain in a transitioned state in order for the signal to be accepted as valid.
Any pulse shorter than this time will be considered a glitch on the signal and rejected by the ECU.