Only turbo models (other than RX8) have been covered. 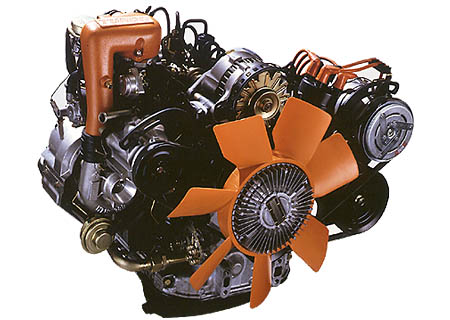 Available in the JDM RX7 Sereis 3 and some HB Cosmo models.  This was a popular easy engine swap for all RX7 Series 1,2,3 models with it being a direct bolt in replacement engine.  Easily identified by the orange hat on top of the carburettor-style throttle body.  They have extremely small ports, small throttle, and as such make very little power.  Distributor ignition with boost retard diaphram. 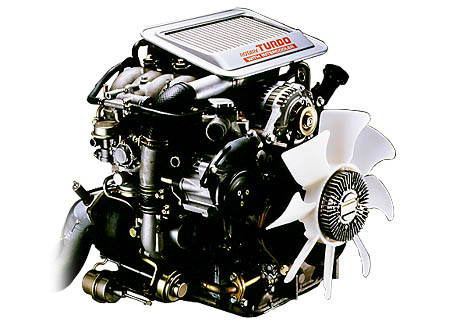 Found more commonly in the 1986-1988 RX7.  Identified by the mechanical rod oil metering pump, twin scroll turbo with control diaphram, straight tube intercooler feed pipe, single TPS, 8.5:1 comp. Waste spark ignition with Toggle-style Trail igniter. This ignition runs the same as a Distributor but has a signal from the ECU to tell the igniter to alternate the output between two coils. 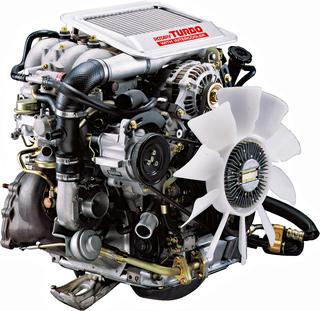 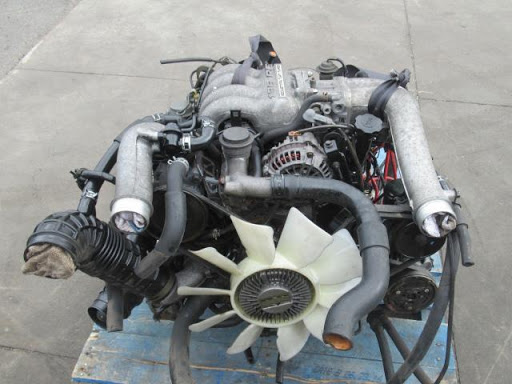 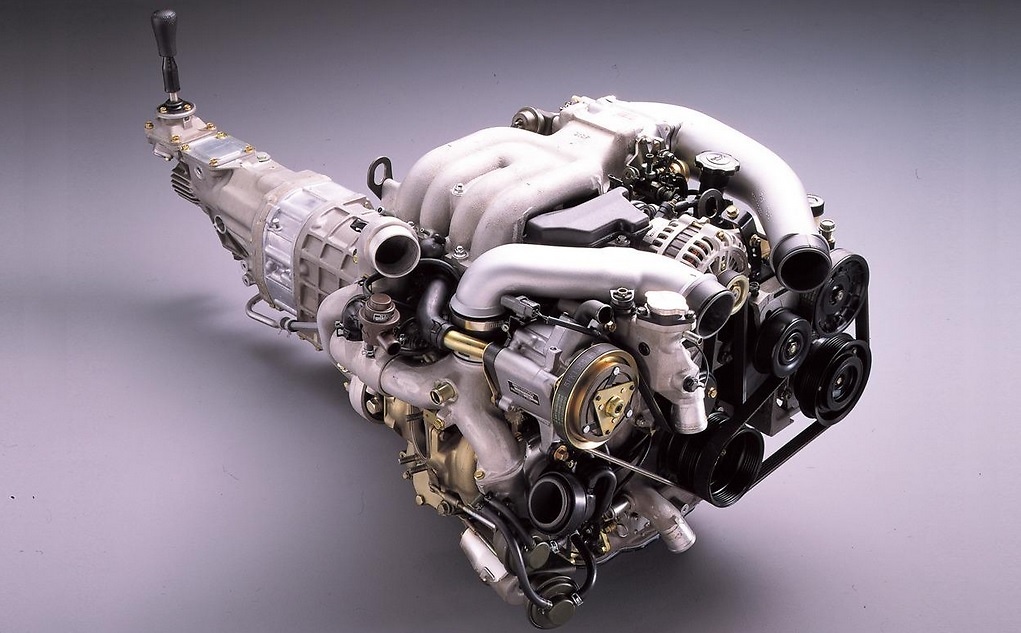 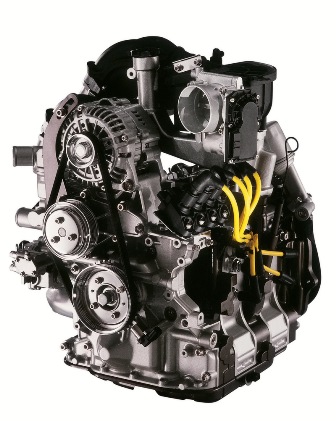 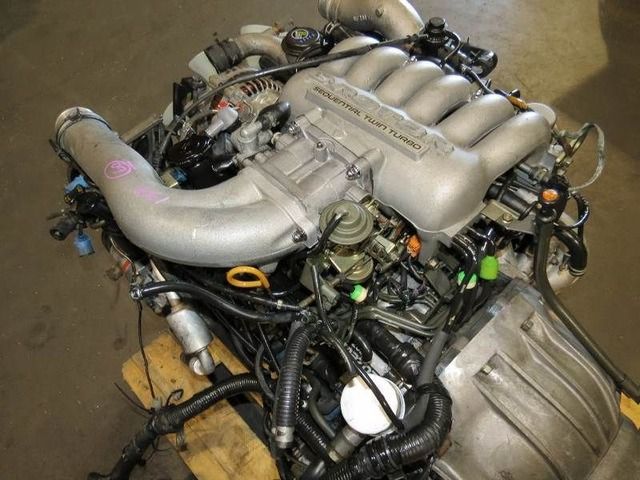 Found only in the JC Cosmo with all having an automatic transmission. 3-rotor engine with Sequential Twin Turbos, specs otherwise similar to the 13B-RE. 2x Dual-Toggle igniters which run in the same way as Series 4/5 ignition but have 3x outputs fired in sequence.  OEM igniters are NOT supported by Haltech ECU's. 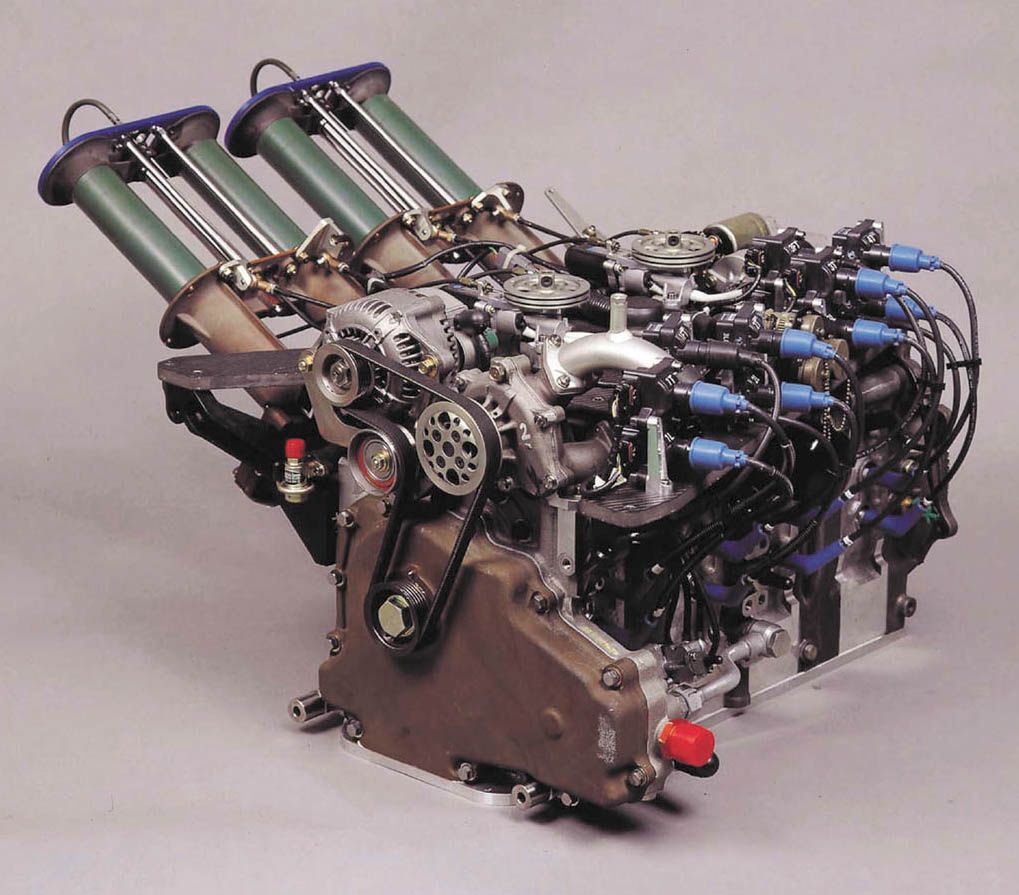 Made famous from Mazda's win at Le Mans.  Not available to the public. There are a number of 4-rotor kits that use custom crankshafts and end plates available on the market.  4-Rotor engines are supported via the Elite 2500 ECU model.

Elite ECUs required the true displacement to be entered for VE tuning, as listed below.

The FC3S has a distributor-like CAS (Crank Angle Sensor) unit with an easily removable inspection cover.  Inside you will find a 24x trigger and a 2x home (sync) each with a reluctor sensor. Being a distributor type system it rotates at half of the crank RPM. 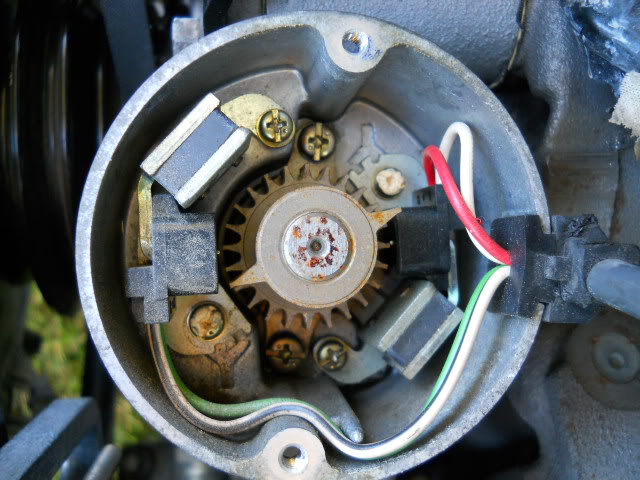 The FD3S has a crank mounted trigger system. It has an inner trigger with 12x teeth and an outer 1x tooth home trigger with both using reluctor sensors.  This gives the same signal pattern as the FC3S CAS. 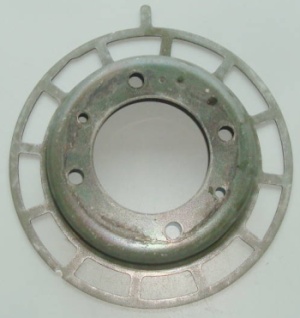 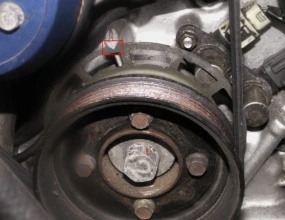 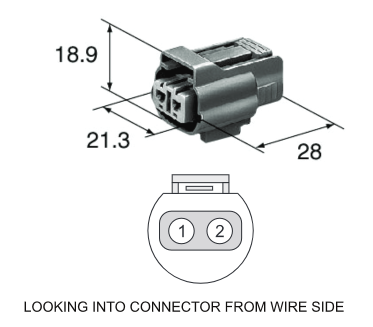 All Mazda rotary engines use Reluctor sensors, and when wired correctly use a Falling edge 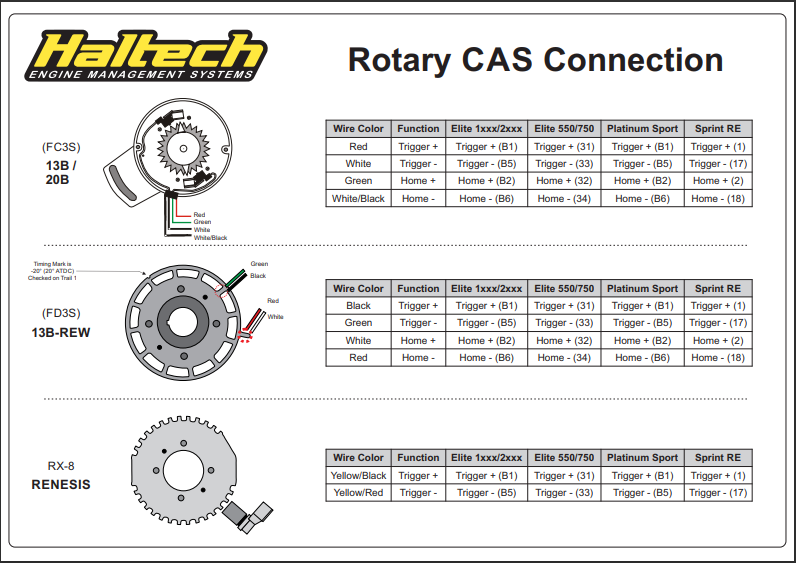 LEAD are the bottom spark plugs and the housing are marked with an "L" to show this.
TRAIL are the top spark plugs and the housings are marked with a "T" to show this.
Haltech treat the rotary engine ignition as if, for example, a 2-rotor was the same as a 2-cylinder with just one spark plug per cylinder.  So when wiring the ignition the Lead spark is wired first, and the Trail is treated as an auxiliary ignition. So they are wired in the follow orders:

FC3S Ignition Coils
The FC3S Lead coil assembly includes a dual-post coil for the Lead spark with an attached single channel igniter module that fires in Waste Spark.  The Trail coil assembly includes 2x single output coils attached to a unique igniter module.  Both igniters ground through the body of the module so they must be connected to chassis ground. The Trail igniter has what is known as a "Toggle" system. There is one timed input from the ECU to the igniter, and a second signal that is sent by the ECU to determine which coil is to be fired.  This ignition system was supported on all Haltech ECU models up until the Elite Series. The Elite Series will NOT work with the Trail igniter.
The Ignition Mode must be set to DISTRIBUTOR and NOT Waste Spark for these coils.  Constant Charge with a Falling edge and 5.0ms dwell. 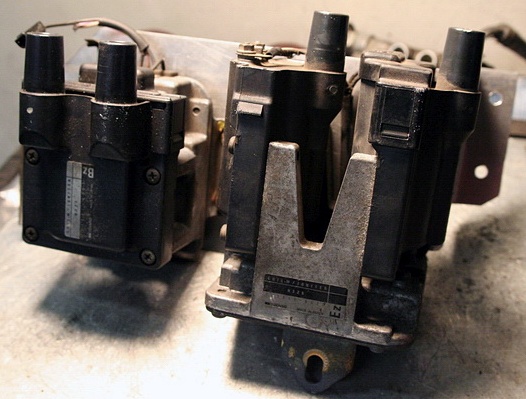 Lead Coil (NOT FOR ELITE. Wiring for Sport Series or older)

Trail Coils (NOT FOR ELITE. Wiring for Sport Series or older)

The FD3S changed to Waste Spark ignition with the ignition coils mounted under the intake manifold and the 3x channel igniter module mounted on the inner guard.  The Lead coil is a dual-post fired in Waste Spark, and the Trail has 2x separate coils.  They should be configured as Waste Spark with a Contant Charge and Falling edge output. 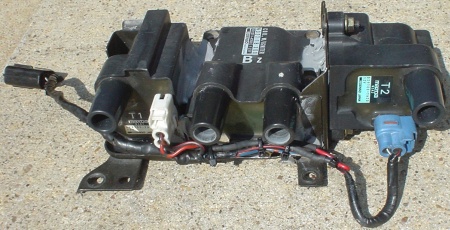 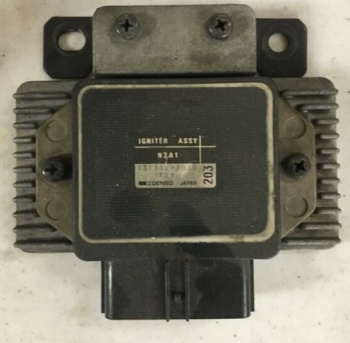 The 13B-MSP engine has 4x ignition coils and uses Direct Fire ignition.  They have an internal igniter module and as such can be wired directly to the Haltech ECU.  They use Direct Fire mode and Constant Charge with a Falling edge. 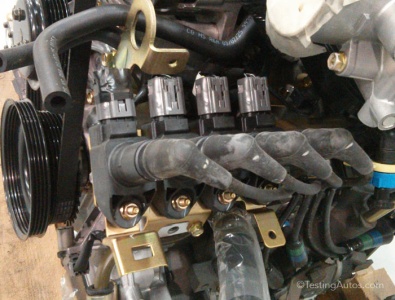 * These engines have a total of 6x injectors   i.e. 3x injector per rotor using 3x stages.   The OEM (Mazda) calls first stage Primary 1, the second stage as Primary 2, and the third stage as Secondary.

The Series 4 TPS can be identified by there being only a single sensor.

Note: Series 4 TPS do not operate over the full range of throttle movement.  They read 100% by around 30% actual throttle opening and are as such not suitable for accurate Haltech ECU tuning.  It is advised to change to the Series 5 throttle body or sensor arrangement.

The Series 5 TPS can be identified be there being two position sensors.  One is a full range sensor and one is the same as the Series 4 sensor.  The full range sensor was added for engines having an electronic oil metering system.

Only the full range sensor should be wired to your Haltech ECU.

Please excuse the hand drawn old diagram.  Finding info on these vehicles is near impossible.

It is recommended to use the internal Haltech MAP sensor for these vehicles.

It is recommended to use the internal Haltech MAP sensor however the OEM unit can be used if preferred.

Old diagram but will be updated shortly 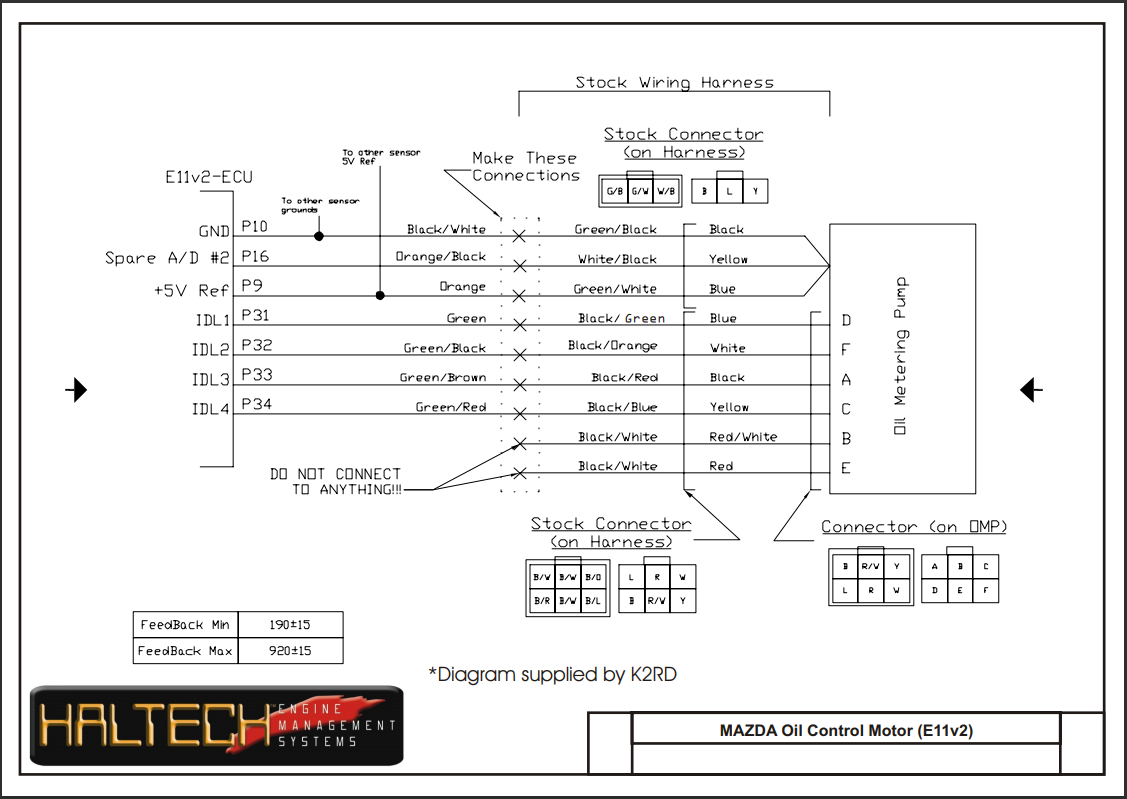