A vehicle speed sensor’s job is relatively simple. It measures the speed of a rotating shaft and sends that information to the engine management system for processing.
The two most important things to know about wheel speed sensors are:
1. What kind of sensor to use
2. Where they can be located
The most common place to find a factory vehicle speed sensor is on the gearbox where you’d usually find a sensor detecting the speed of the output shaft which is directly related to road speed.

If there’s no sensor on the gearbox, odds are there will be a sensor looking at a number of teeth around a single wheel hub or even a sensor mounted on each of the four wheel hubs.

Having a sensor mount in every wheel hub usually means the car is fitted with ABS and these sensors are used to detect if a wheel has locked up under braking. So our first task is to locate the sensor then determine what kind of sensor it is.
It will be either Hall Effect (digital), Interrupt Style (digital), Magnetic Inductive (passive) or Magneto Resistive (active). It’s very important to know which type of sensor we are dealing with as the wiring techniques will vary depending on the sensor.

If you’re lucky enough to find a Hall Effect or Interrupt style sensor on the gearbox – things are pretty straight forward. All you need to do is share the factory signal with a Digital Input wire on your ECU and that’s it!
If your car is fitted with ABS (that you’re still using) and it uses magnetic inductive or magneto resistive sensors then things can get a lot trickier, to the point where it might just be easier to fit a speed sensor of your own.
There is an art to sharing ABS sensors (especially magneto resistive style sensors) which require extra electrical circuits to isolate the aftermarket ECU and ABS computer so one doesn’t upset the other. Sounds complicated? That’s because it actually is.
Fitting your own sensor on the other hand is not as daunting as it sounds. Grab a Hall effect sensor and fabricate a mount so the sensor can detect something like the heads of the wheel studs (on the back of the wheel hub assembly), the bolts holding the front CV together or the bolts on a tail shaft.
When fitting a new sensor have a think about which wheel you’re fitting it to. Is it the driven wheel (a wheel that will show wheels pin) or the undriven wheel (a wheel that will show road speed).
Typically it’s best to measure a driven wheel first, then add a second sensor to an undriven wheel. This way you can determine a slip percentage between wheels to build a traction control strategy if required. 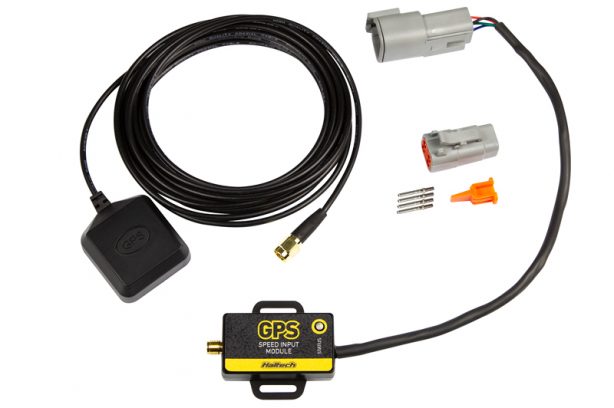 HT-011310 - Click me to find me in the store
You can also fit a GPS speed module. This little gadget has a GPS antenna and a speed signal output and it’s connected to the ECU as if it was a non-driven wheel speed sensor.
After you have your sensors fitted and wired to the ECU we just need to calibrate the number of pulses to the speed the vehicle is travelling.
This is a very simple process where we drive at a known speed (so, on the dyno or using a GPS speed app on your phone) then let the ECU know this speed and press “Calibrate” – that’s it!
The ECU then determines how many pulses it receives at the known speed and can therefore determine road speed all the time. This takes gearbox ratios, diff ratios and rolling diameters into account so all the hard work is already done!
Once you have a road speed input, the ECU can send that speed information to a digital dash, set up speed limits like valet mode or pit lane mode, set up anti-stall idle control strategies so the engine comes back to idle nice and smoothly depending on road speed.
You could also set up boost control strategies based on road speed and of course, you could set up traction control strategies based on the difference between each of the wheel speed inputs.
So, while your ECU doesn’t NEED a wheel speed input to operate, it’s certainly a nice thing to have!